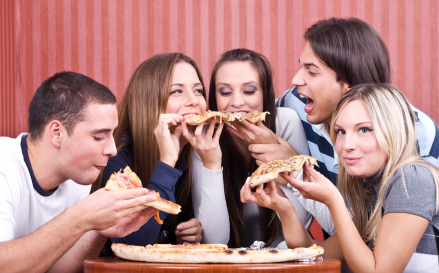 Two college students were avid seekers of pizza near IUP and, of course, free pizza! Chris and Taylor clicked in AP physics during high school, so they decided to attend the Indiana University of Pennsylvania together. While others at the University see Chris and Taylor’s relationship as being more toxic than dumping water into acid (never do that, by the way), they see their relationship as pH-7 (neutral).

Chris & Taylor’s Social Circles at the Indiana University of Pennsylvania

It didn’t take long before Chris and Taylor started making new friends at IUP. Some of Chris’ friends did not like Taylors’, and the same was true the other way. It turned out that three cliques developed: the “we like Chris’ friends only” clique, the “we like Taylors’ friends only” clique, and the clique who likes everyone (which turns out to be the only clique nobody else likes because they try too hard to be liked, making them unlikable).

The Legend of Free Pizza Near IUP

It is widely known that pizza is a staple of college students. When Chris and Taylor spent time alone to study, or simply chill, you can bet that a pizza wasn’t far away. At the time, Serrianni’s offered free pizza near IUP in an online, monthly promotion that exchanged a free slice of pizza for a friend’s email address. This worked out well for Chris and Taylor because, between them, they had a lot of friends. We expanded our promotional mailing list and the guys got plenty of free pizza.

Up Next: Chris and Taylor struggle with the morality of giving away their friends’ info… Keep Reading