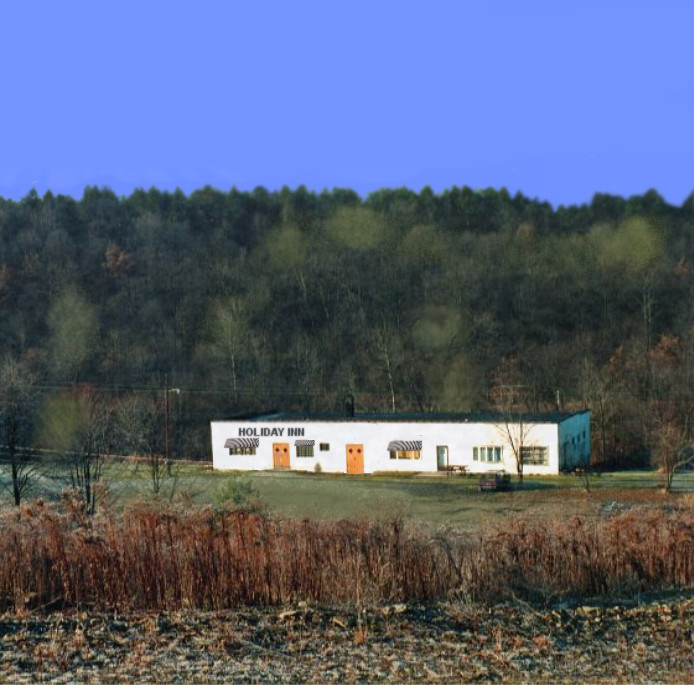 Indiana County got a great Christmas present in 1950.  On December 23rd, Sam and Ann Serrianni opened the Holiday Inn between McIntyre and Coal Run, two years before the hotel chain of the same name debuted.  Those two coal patch towns may have been tiny, but their new restaurant and bar soon gained a giant reputation as a hot dance spot and as home to the county’s first (and best) pizza.  Longtime Indiana DJ, Jerry Boucher, and future County Commissioner, Bernie Smith, spun their first platters at Holiday Inn record hops.  In the early 1950s, some of the last Big Bands played there, featuring everything from polka to rock.  Over the years, the Inn packed ’em in on Saturday nights.

It was not the Serriannis’ first try – they had operated a diner named for boxing and wrestling champ Primo Carnerea after the war – but it was the Holiday Inn, inspired by a 1942 movie of that name, that was destined to become their life.  Sam built the cinderblock structure himself, and he and Ann raised their “crew of four” in rooms behind and beneath it in the decades that followed.  Son John remembers childhood years spent in Holiday Inn’s kitchen learning the trade beside siblings Valerie, Marlea, and Samuel Junior.

“Yeah, I was the only one of us who never married, so when the others left home, I stayed on as the bartender until my early thirties.  My parents were introverts – never joined the Chamber of Commerce and all that – so it just made sense for them to hire family.”

As popular as the Inn would become, not everyone was receptive at first.  Second-generation pizza lover Antoinette Fontana laughs, “When we were kids, some people called it ‘dago food’.  But by the time I was thirty, pizza was everywhere and pasta was gourmet!”  With those early attitudes in mind, the family anglicized their name to Serrian, and in a 1953 ad went as far as to stress that they were “both natives of Indiana County.”  But the old family name is well remembered locally, and daughter Valerie’s pizzeria, built on the same property as the now-closed Holiday Inn, is even called Serrianni’s in honor of her parents.

By the early 1990s, Sam was thinking about selling the business.  Tastes and the times had changed, and since he was in his 70s, retirement seemed like a good idea.  But it was fire, not a buyer, who would settle the matter.  In the early morning hours of Christmas 1996, the McIntyre landmark was gutted by an apparent act of arson.  Holiday Inn had served its last customer almost exactly forty-six years after its first one.

If you are ever driving through Young Township on County Road 3031, keep an eye out for a long white cinderblock building between McIntyre and Coal Run, right next to Serrianni’s Pizzeria.  Shuttered now and quiet, it stands like a monument to the ones who built it.

Holiday Inn, Sam and Ann:  Gone But Not Forgotten.